The Pitt Momentum program funds internal university projects that have significant potential for impact. Since 2019, the Office of the Provost and the Office of the Senor Vice Chancellor for Research have collaborated to recruit and fund research projects, especially interdisciplinary projects, from the humanities to the physical sciences. These projects not only re-think new collaborations, but re-think research itself. Exploring ideas, interactions and creative work among students, individuals, cultures and communities is valued in the same way as laboratory experiments or computer simulations.

Uniquely, Momentum Funds awards are structured in three tiers meant to provide structure and support for each phase of large collaborative projects, as well as funding for smaller projects:

We talked to past winners to learn what impact the Momentum Funds had on their work. 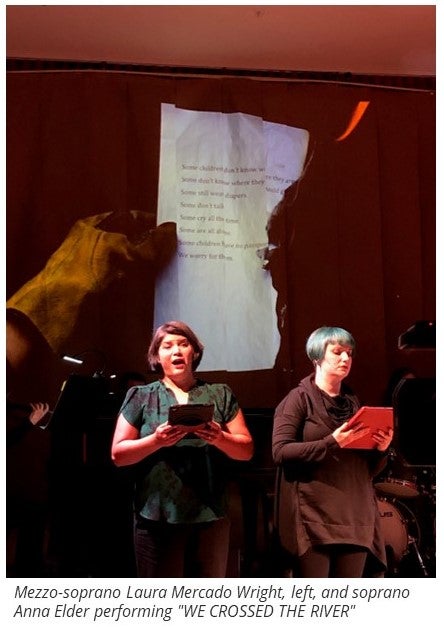 A Pitt Momentum project can be a performance. In 2020, Eric Moe, Andrew W. Mellon Professor of Music, and Angela Cruz, associate professor in the Dietrich School's Department of English, won a Momentum Fund Award to create “WE CROSSED THE RIVER,” a multi-media collaboration of voice, music and video. Cruz wrote the libretto while Moe composed vocals and an instrumental sextet. The piece looks at the detention of undocumented children in camps at the U.S. border, with the text formed as a collage of the actual testimonies of detainees.

The piece premiered successfully at Pittsburgh’s City of Asylum LitFest 2021 (registration is required to view the performance). The New York New Music Ensemble is planning a performance of the piece with expanded instrumentation in 2023. The Pittsburgh-based ensemble Kamratōn will present the expanded version locally in spring 2024.

“The Momentum Fund support made the project possible, primarily by covering the performer fees,” says Moe. “City of Asylum handled production and broadcast costs, but they wouldn’t have been able to pay the performer fees as well.”

Moe emphasizes that “WE CROSSED THE RIVER” is meant to spur activism, not just entertain.

“At present, unaccompanied children are still being held in U.S. detention centers,” he says. “I suggest supporting the work of the advocacy organization RAICES, the Refugee and Immigrant Center for Education and Legal Services.” 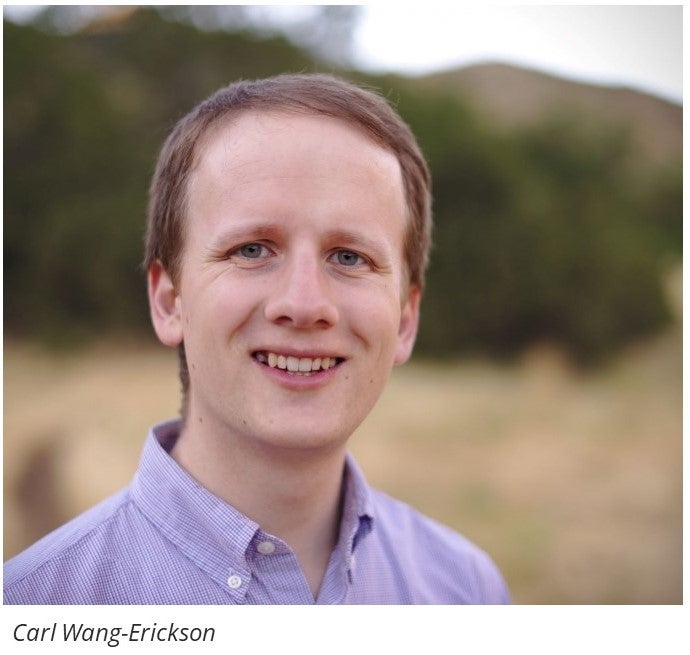 For Carl Wang-Erickson, the Momentum Funds helped do something he was not planning. An assistant professor of mathematics in the Dietrich School’s Department of Mathematics, Wang-Erickson describes himself as a number theorist working with the simple-seeming rational numbers we are all familiar with from counting and fractions. But theoretical mathematicians have for thousands of years sought to understand how rational numbers solve certain kinds of equations.

“The research area of the project is known as Diophantine geometry,” Wang-Erickson explains, “which is about determining the integer or rational number solutions to polynomial equations, such as linear equations and quadratic equations.

“In the last 15 years, techniques were developed to make progress in Diophantine geometry known as the Chabauty-Kim method (see Quanta Magazine for a good overview of the method). The original proposal was to collaborate with an expert on that method and host an international conference at Pitt that would bring together experts.”

Still, Wang-Erickson says, “I would have never started organizing it if I hadn't received the Momentum Seeding award.”

So the project became student oriented. “I applied the Momentum Seeding funds to stipends for students to carry out guided independent in-person mathematical explorations. Altogether, with support from the Pitt Math Department and the Momentum Seeding award, I was able to support three undergraduate students and one graduate student in the summer of 2021. They explored two industrial applications of number theory: cryptography and coding theory, which makes digital communication secure and able to recover from errors in transmission. They wrote computer programs that executed encryption, decryption and error correction, among other creative efforts. I think the collaborative environment they experienced was a welcome shift out of the general COVID malaise.”

Digging into an environmental competition 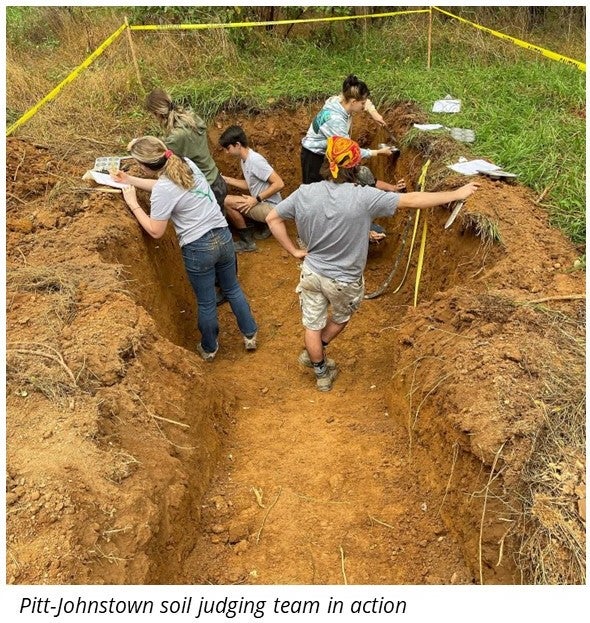 Undergraduate experience was at the heart of the Momentum Fund awarded to Mitzy Schaney in 2020. Schaney, assistant professor and director of Environmental Studies at Pitt-Johnstown, used the funds to purchase equipment for soil-judging competitions.

What is soil judging?

Schaney explains. “It is classifying and identifying soil properties such as color, texture and structure, and drainage characteristics to determine their suitability for human uses like agriculture and roads and environmental functions like surface runoff.”

“The Momentum Funds enabled us to purchase needed equipment to learn about soils and participate in the competition annually,” she says, “Before the funding, our Geography and Environmental Studies Department did not own any field equipment.”

For students, she says, the competition is a unique experience and a great resume-builder. “It is a hands-on chance to learn from experienced scientists. Soil judging develops and tests a student’s ability to apply knowledge and skills to real-world natural systems."

Telling the story of a Victorian freethinker 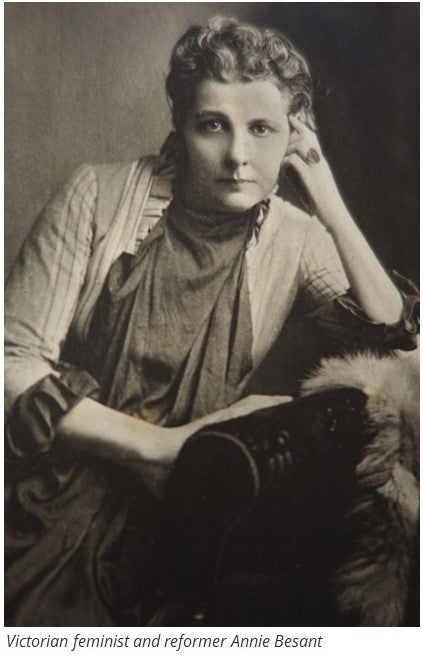 "A Dirty, Filthy Book" is how British prosecutors described an American birth control pamphlet at the 1877 obscenity trial of Annie Besant, who was responsible for publishing the pamphlet in Britain. As it happens, "A Dirty, Filthy Book" is also the title of a biography of Annie Besant written by professor Michael Meyer in the Dietrich School’s Department of English, to be published in 2023. Much of the research for the book was supported by a Momentum Funds grant.

“Annie Besant was a pioneering freethinker in Victorian England,” Meyer explains. “More than four decades before the first woman was admitted to the British bar, Besant defended herself before the Crown -- and won. All but forgotten today, Besant was among the first public advocates for a woman's right to her own body.”

The Momentum Fund allowed Meyer to travel to the United Kingdom (UK) and work at length in archives and libraries, including Cambridge University, Lambeth Palace, the Wellcome Institute, the British Library, the Bishopsgate Institute, Middle Temple, and the National Archives at Kew. In addition to supporting research for the book, the Momentum Fund grant helped support Meyer as a fellow at the University of Oxford’s Centre for Life Writing in the fall of 2021.

“Thanks to this research, I was able to tell the story largely through prominent voices of the era,” Meyer says. “There was Annie Besant and her partner Charles Bradlaugh against their nominal prosecutor Queen Victoria and their nemesis Charles Darwin – he opposed contraception. She had a young ally in George Bernard Shaw, and a critic in George Eliot. The Lord Chief Justice was sympathetic, and of course the national British press was baying like bloodhounds.”

"A Dirty, Filthy Book" will be published in 2023 by Penguin Random House in the UK, and Harvard University Press in the US.