Pitt Historian and Poet Recognized with Guggenheim Awards and More 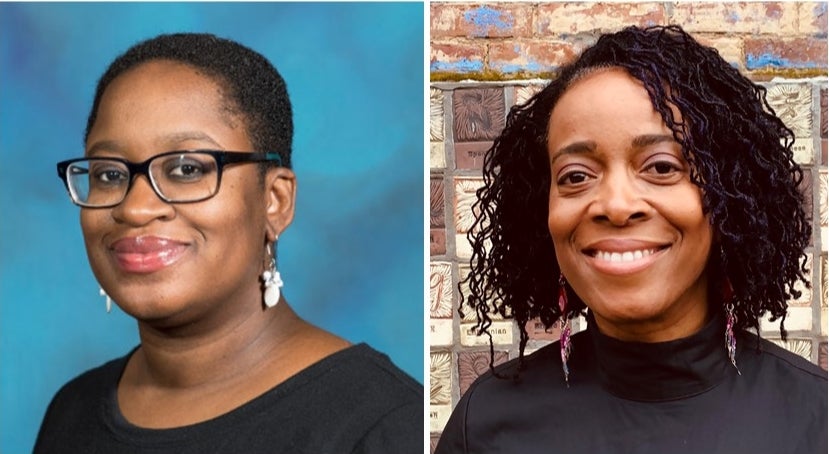 Times are changing and so are our perspectives on research in areas such as poetry and history.  Historian Keisha Blain (left), and poet Yona Harvey (right), both associate professors at Pitt in History and English, respectively, are among the 180 recipients of prestigious 2022 Guggenheim Fellowships, described by the John Simon Guggenheim Foundation, as recognizing “exceptional individuals in pursuit of scholarship in any field of knowledge and creation in any art form, under the freest possible conditions.”

Harvey is one of seven fellows selected in poetry. She draws on her writing while teaching in Pitt’s writing program, encouraging her students to embrace the complexity of the writing process, and allowing them to work through the discomfort and pressure of a messy first draft and revising. Similarly, her poetry and prose writing embark on topics that can bring discomfort – such as relationships between mothers and daughters and mental health – topics often not talked about.

She describes her poetry as being like research in that it “is a sort of interpretation or expression about everything gathered and learned.”  Now, she plans to use her Guggenheim fellowship to travel to Japan, a country she describes as paying fine attention to detail in their environment, while she re-explores visual and concrete poetry.

Keisha Blain is a more than a researcher in field, but also an activist. The associate professor in Pitt’s history department engages publicly as columnist on MSNBC and her research shines a light on often overlooked Black activists, particularly women. In 2022, in addition to the Guggenheim fellowship, Blain was most recently awarded an Andrew Carnegie Fellowship. Her standout anthology “400 Hundred Souls” – edited with Ibram X. Kendi ­– appeared on the New York Times Bestseller list and her work regularly appears in The Guardian, The Atlantic Monthly, and the Washington Post in addition to her MSNBC column.

The focus of her research is African American and African American women’s history, and how their experiences frame Civil Rights and social justice activism in the United States. Her book “Set the World on Fire: Black Nationalist Women and the Global Struggle for Freedom” brought back to the mainstream narrative of activism international activists such as Celia Jane Allen and Amy Ashwood Garvey. Her most recent book, “Until I am Free, Fannie Lou Hamer’s Message to America,” celebrates the life of a woman who was a central force in the Civil Rights movement, but who today is obscured by better-known figures.

Harvey and Blain are united by a perspective that thought, learning, and human interactions inevitably leads to action and activism, representing a new step in Guggenheim's call for scholarship under the freest possible conditions.